As the COO and CTO of Ellementa, I make it no secret that I am new to cannabis. I’m gregarious in building the Ellementa tech infrastructure and scaling our community, but I’m timid in my own personal experimentation with cannabis. At some point, I won’t be able to claim this naïveté. But right now, it’s all mine and writing it out helps me deal with the feelings of being an imposter in this space. I am surrounded by so many incredible women that have been advocates for cannabis wellness and medicinal marijuana in Chicago for years. Frankly, it’s intimidating, but I know it’s the right time for a company like Ellementa – so I persist.

Because I live in Chicago, I’m the interim organizer of our monthly in-person gatherings here until we find the right woman to take the reigns (is it you? Call Me!) It’s a bit nerve-wracking to prepare to lead these gatherings given my lack of background with cannabis. But again, I persist – women are counting on me.

At our first Chicago meeting, we all sat across from one another at the cozy plant filled event space called The Living Room. We talked about our cannabis journeys together. There were women who drove an hour and a half from the suburbs to be there, just because they were canna curious and wanted to ask questions freely. There were women who’d found our flyers at their dispensaries. Women who had been using cannabis for pain management and mental health reasons for years. And women, like me, who were just starting to dip their toe in and needed a little guidance. 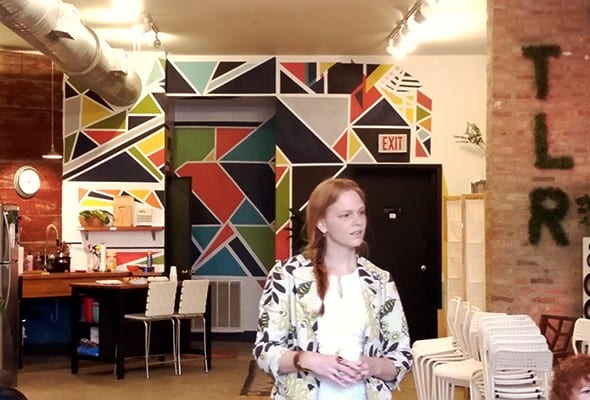 We had a sponsor that night, RESQ Organics. They made CBD infusions for pets that became so popular they had to start making them for people. I encountered women using cannabis to treat serious ailments that I’ve never heard of before. I met women of all ages, women from diverse backgrounds, all with different definitions about what perfect health feels like. Our first meeting was timid and raw and honest, and if I’m being honest, a little reserved, like I was. Lee Gains, a reporter from Chicago magazine was there, she wrote a great piece about it.

At the end of that first night, the owner of ResQ Organics took my hands, looked me in the eye and said, “You are the right person for this community, stop trying to fight it.”  I didn’t know if I wanted to cry with gratitude or run in fear, but I’m telling you, that’s the kind of honesty that was in that room. We saw each other, it was amazing.

Our second meeting was about Cooking with Cannabis. I picked the topic because I was curious and thought I had a lock on someone to speak about it. When the speaker didn’t materialize, it was up to me. And, as is my custom, I overcompensated and took it upon myself to learn and try everything. I wrote and designed a little ebook and handouts. I created, tested, and tried recipes – I even made recipe cards. 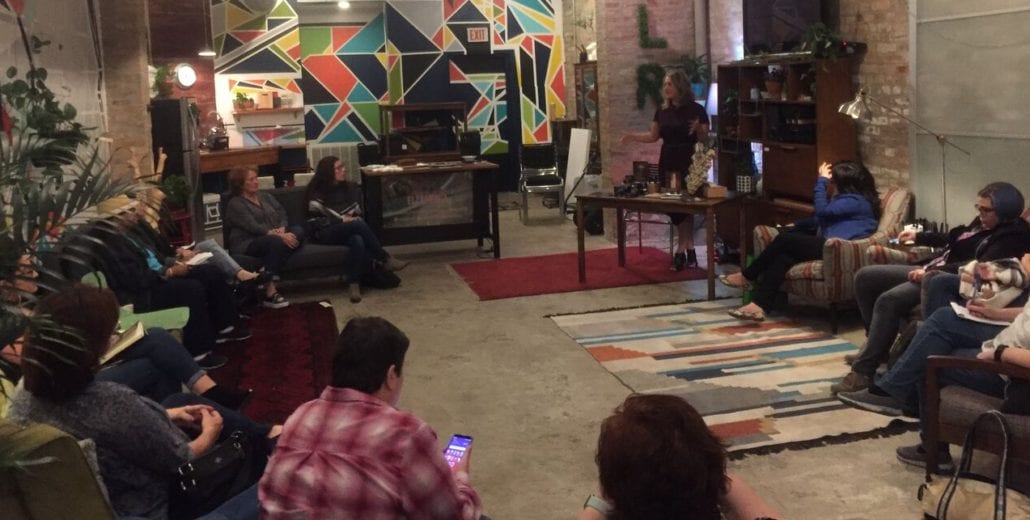 We had a couple sponsors, Levo Oil, they make an oil infusing machine which I have fallen in love with, and Kiva Confections, who among other things makes a yummy chocolate covered blueberry available in tiny microdoses. As an executive of Ellementa, I wanted to do them proud. At the event, I was super nervous, and it showed. There were twice as many women present as there were at our first event. The Kiva rep talked about edibles. I talked about what I had learned in my kitchen. I gave a demonstration of the Levo machine.

It’s Not About Weed, It’s About Women

And then something happened, the more experienced women started sharing their own recipes and tips. The less experienced women started asking them questions. The room came alive, and before I knew it, the women were laughing, connecting, and showing each other how their various vape pens worked. There was no pressure for me to know everything, everyone there was so accepting and welcoming and willing to share what they knew and what they didn’t know.

By the end of the night, women who were strangers an hour before were walking arm in arm out the door, planning Friendsgivings together. 24 year old cycling enthusiasts were talking with 65 year old grandmothers about the care of women’s bodies after childbirth. Everyone was excited to try Kiva’s candies and soak hunks of fresh bread in the rosemary olive oil we’d made with the Levo. Nobody wanted the night to end.

And it dawned on me, these ladies don’t need a leader, they need each other. I need them. And while my mission at Ellementa is to provide a place both online and offline where women can find quality information about cannabis that is relevant to our lives, all I actually have to do as the interim gathering organizer is provide the setting for us to be together. Chicago women are smart and kind and curious and so happy to learn together and share their cannabis struggles and successes with one another.

Our next Chicago gathering is in a week, I’m really excited to be going.

The Power of Taking Women Seriously