Have you heard the menopause myth about how women going through menopause cry all day long about the fleetingness of youth? Or the myth that post menopausal women have cobwebs “down there” from lack of use? Or every woman gets hot flashes? (Sure, 80% do, but you may be one of the 20% who doesn’t).

Menopause is a natural process that all estrogen- and progesterone-producing humans go through toward the latter part of life. Think of menopause as the reverse of puberty – not something to be vilified, but something all women will experience in one way or another. At a certain point, our ovaries stop producing estrogen and progesterone, both instrumental in fertility and pregnancy.

Not all women experience menopause in the same way, but it can be hard to separate truth from fiction when discussing “The Change,” as this transition is sometimes known. Let’s bust some of the most prevalent menopause myths and talk about natural ways you can alleviate some of the uncomfortable symptoms that could come with aging.

Menopause Myth #1: It only happens to old women and lasts a year or two.

Menopause is marked by the absence of menstruation, not due to pregnancy, for a year or longer. On average, menopause happens around the age of 51, however, symptoms of menopause can start up to 10 or more years earlier. According to the University of Utah Health, in the United States, most women reach menopause between 45 and 55 years of age.

“You read that right. The process of menopause, from start to finish, can last longer than 10 years and can happen to some women as early as 30.”

Some women begin experiencing menopausal symptoms prior to the actual stopping of their periods and even as early as 30 years old. If you’ve had reproductive health issues that affect your uterus or ovaries – or you’ve had your ovaries removed – you could be sent into menopause early. Menopause can also occur after giving birth, and while breastfeeding, a condition that is usually temporary but not in all cases.

The symptoms that occur before menopause take place during a life stage called perimenopause. Perimenopause is often marked by the onset of one or more of the following symptoms: irregular periods, insomnia, mood changes, vaginal dryness, increased cholesterol, loss of bone density, urinary incontinence, and hot flashes.

Typically, menopausal symptoms don’t usually happen all at once (except in the case of menopause triggered by an oophorectomy or removal of the ovaries). For many women, menopause is manageable through diet, exercise, and using an ever-growing bevvy of products aimed at addressing the symptoms of menopause – from microdosed edibles to vaginal suppositories. While Hormone Replacement Therapy (HRT) is an option offered to most women (unless they are at risk for or have had ovarian, uterine, or breast cancer), there are other options out there to consider with less associate risk. 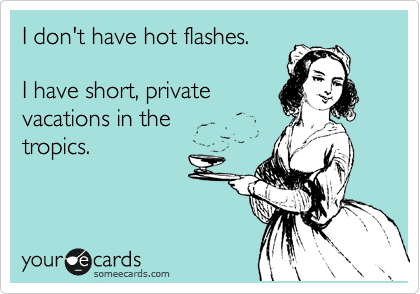 While it may be true for every menopausal character on television to have hot flashes which leads her to stick her head in the freezer (see Clair Huxtable in Season 7 of the Cosby Show), not every woman experiences hot flashes, and even if they do, not every hot flash feels the same. For some women, it is a faint rushing feeling. For others, it can feel like a raging fire, complete with red skin, rapid heartbeat, mounting anxiety, and profuse sweating.

Some ways to reduce the chances of or the intensity of hot flashes including stopping smoking and exercising. Check with your physician if modifying your diet to be higher in phytoestrogens might be helpful. Phytoestrogens are plant-based foods that can mimic estrogen in the body such as soy, sesame, and flax. While these foods may relieve hot flashes, increasing phytoestrogens in your body could present similar risks as hormone replacement therapy.

Other natural ways to address symptoms of menopause have been used by women for centuries and include herbs like black cohosh (medical studies vary in proving its effectiveness) and licorice root. Eating more dairy products is something else that has been studied, with researchers pointing to the importance of women taking in more calcium, vitamin D, and protein during perimenopause and menopause.

With menopause comes a host of physical symptoms including loss of elasticity, thinning of the vaginal walls, and loss of moisture in the vagina, all of which can make sex uncomfortable to downright painful. Additionally, a drop in testosterone levels means you may not get sexually aroused as easily as you did when your hormones were at higher levels.

Menopause doesn’t mean that you are doomed to never want to have sex again. Eating foods with testosterone-boosting nutrients like proteins, zinc, magnesium, vitamin B6, and Omega-3 fatty acids can help increase your sex drive. Using non-irritating lubricants and soothing suppositories can help alleviate vagina dryness and pelvic pain.

Note that with the loss of moisture and elasticity, your lady parts may be more prone to yeast and bladder infections. Be sure to only use lubricants that are pH balanced and made specifically to be put on or in the vagina.

If you’re curious about cannabis and CBD suppositories to address vaginal and pelvic pain, there are products such as Hello Again with THC (only available in California) or Harmony Menopause Support with CBD available online.

Menopause Myths #4: Symptoms are only physical.

The hormonal shifts at the during perimenopause can trigger a variety of mood-related symptoms, including anxiety and depression. Hormonal changes may also intensify mood-related disorders if you are already suffering from anxiety and depression. Other things that can affect mood during perimenopause include insomnia – lack of sleep exacerbates irritability – and age-related thyroid issues.

The good news is that menopause-related mood changes can be manageable through diet, exercise, and plant and botanical medicines including THC and CBD. In some cases, a prescription to an anti-anxiety medicine or antidepressants may be in order. Check with your physician. Side note: Some antidepressants could reduce hot flashes as well.

In a 20-year longitudinal study of midlife, post-menopausal women reported feeling less stressed and more themselves than when they were younger. Professionally, there are more post-menopausal women in the workforce today than ever before, and mature women are doing incredible things in their 50s, 60s, and beyond. Just look at Michelle Obama, Kamala Harris, and Oprah Winfrey.

Even if our culture can be so focused on youth and on covering up our natural aging process, there is definitely life after menopause. Now that we’ve busted some menopause myths for you, go out there and conquer the world. This is your time.

Effects of Licorice on Relief and Recurrence of Menopausal Hot Flashes

The trajectory of negative mood and depressive symptoms over two decades

This article was brought to you by: Hello Again

It’s not you, it’s menopause. Hello Again is a cannabis-powered vaginal suppository that combines the healing power of cannabis with soothing botanicals to provide relief from the physical and emotional challenges brought on by menopause. Hot flashes, memory fog, anxiety, moodiness, vaginal dryness, low energy, pain and sleep issues are targeted by THC and CBD as well as other specifically chosen botanicals to help women feel healthy, not high. Hello Again believes women deserve to feel like themselves again.  May the force be in you!

The Benefit of Matcha Tea
Scroll to top